The Spanish Foundation for Science and Technology (FECYT) has acknowledged the work carried out by UNIR with regards to scientific dissemination, as they granted UNIR to join the Scientific and Innovation Culture Network.

The application to this network was carried out by UNIR Research, and allowed UNIR to become the first online university getting this accreditation as of Scientific and Innovation Culture Unit (UCC+i), like 66 other Spanish institutions.

FECYT, an organisation at the Ministry of Economy and Competitiveness (MINECO), recognized two lines of actions that UNIR Research will focus on: the dissemination of R&D results on the first hand, and advising and training services to the university researchers on the other hand, which will allow UNIR Research to develop significantly its dissemination action plan.

We are constantly innovating in our ways to approach Science to the Society. One of our goals is to implement and give an important role to multimedia formats like video. There is an example of a video edited to explain our participation on the European Project: Inspiring Science Education:

The Scientific and Innovation Culture Units became one of the main dissemination agents in Spain as far as science and innovation are concerned. They play a key role so to improve and increase citizens’ training, culture and scientific knowledge.

Out of this hectic activity on scientific dissemination, UNIR Research counts on an important presence in Media, along with the valuable contribution of the various services, tools and support ways for research, including research groups, chairs, agreements, and others.. ABC, La Razón, Europa Press, EFE, El Economista, Informativos Telecinco or La información are examples of the media which have published UNIR Research results, and echoed the scientific activity. The Scientific and Innovation Culture Unit (UCC+I) worked jointly with UNIR Communication Department for this purpose.

Our presence on social networks is based on two accounts on Twitter. One for our International activities: @UNIRresearch_En and the other dedicated to our researchers @UNIRresearch. 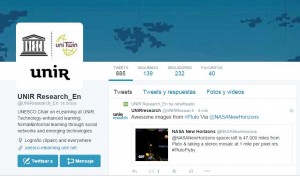 We hope that you enjoy Science Dissemination news and updates.