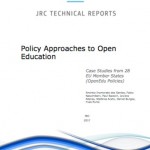 Back in 2013, following the momentum brought by the first World OER Congress organized by UNESCO in 2012, the European Commission issued a Communication called Opening up Education, basically urging all Member States to put in place policies and initiatives aimed at increasing access to education through the use of Open Educational resources and Open Educational Practices. Five years later, it is time to ask ourselves what has happened since then in terms of policies and to search whether initiatives aiming at opening up education in the EU Member States actually exist, and if so which kind of policy they are.

The challenge (any research on the 28 EU Member States is challenging by definition) was taken up by the European Commission’s Joint Research Centre (JRC) in collaboration with the Research Institute for Innovation & Technology in Education (UNIR iTED) at the Universidad Internacional de la Rioja (UNIR). An international team carried out the work, with assistance from 28 ministry officials and other experts who agreed to be interviewed. The interview work was supported by substantial desk research across all Member States, for which a further large number of experts on open education were consulted, along with outputs from key projects such as OER World Map, OERup!, D-TRANSFORM, ADOERUP, and POERUP.

All identified policies were analysed using the OpenEdu Framework produced by JRC, which identifies six core dimensions of open education (Access, Content, Pedagogy, Recognition, Collaboration and Research) and four transversal dimensions (Strategy, Technology, Quality, Leadership). This comprehensive 164-pages report is the first one of its kind to bring together at a detailed level policy work in open education for a complete geopolitical region.

Together with this report, JRC has also issued Going Open, a shorter report bringing policy recommendations on open education at regional, national and EU levels, also part of the JRC’s OpenEdu Policies project.

Notably, the publication of these reports is raising a lot of interest, as shown by the webinar held during the Open Education Week, by this post on Open Knowledge International and by an upcoming presentation at the OER18 Conference, in April 2018.

If you are interested in knowing which kind of policies and initiatives exist aiming at opening up education in and around your country, and especially which initiatives seem to be more successful in increasing access and quality of education through open approaches, the report is available at https://ec.europa.eu/jrc/en/publication/policy-approaches-open-education-case-studies-28-eu-member-states-openedu-policies.