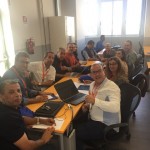 From the 25 to the 29 of September 2017, the OpenMed project organized an intensive training week in Torino, gathering 70 university professors from Egypt, Morocco, Jordan, Palestine and Lebanon with the aim of building capacity in the use of open education approaches and in the creation of Open Educational resources. Following this successful moment of collaboration and multicultural learning and of exchange of practices, the course is now entering in its online phase  which has been designed and developed in its content and approach under the coordination the Research Institute for Technology & Innovation in Education (UNIR iTED), at Universidad Internacional de la Rioja (UNIR). Following a pilot delivery of the course until March 2018 involving the eight opened partner universities, the course will then be opened-up in its English, French and Arabic versions.