The article “The evolution of sustainability models for Open Educational Resources: insights from the literature and experts“, published as JCR-SSCI in the journal Interactive Learning Environments, has been referenced by UNESCO as a good practice during COVID-19 in the context of the UNESCO OER Dynamic Coalition and the UNESO OER Recommendation, in which UNIR iTED participated as an active designer. 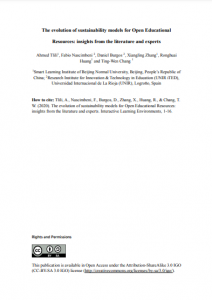